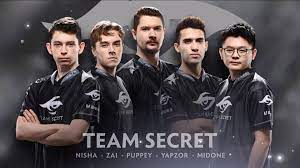 Team Secret recently announced it entered into a partnership with blockchain-based gaming organization DMScript. At this time, the details surrounding the agreement have not been revealed, but it is being reported that Team Secret will help “introduce” DMScript’s gaming services to the public.

John Yao is the Chief Executive Officer of Team Secret. He commented on the partnership in a press release. “DMScript is bringing new technology to improve the experience of gamers everywhere,” he said. “We’re proud to be part of the marketing effort for this and excited to reveal what they have in store.”

DMScript is a company based in the United Kingdom that operates a blockchain cloud gaming platform known as Holonex and a gaming network called Tourne. The organization has partnered with several well-known brands including Red Bull, NVIDIA, Twitch, and Mercedes-Benz.

Team Secret is an esports organization based out of Wilmington, Delaware. They operate teams that compete in titles like Dota 2 and League of Legends.

(All information was provided by Esports Insider, The Esports Observer, DMScript, and Team Secret)