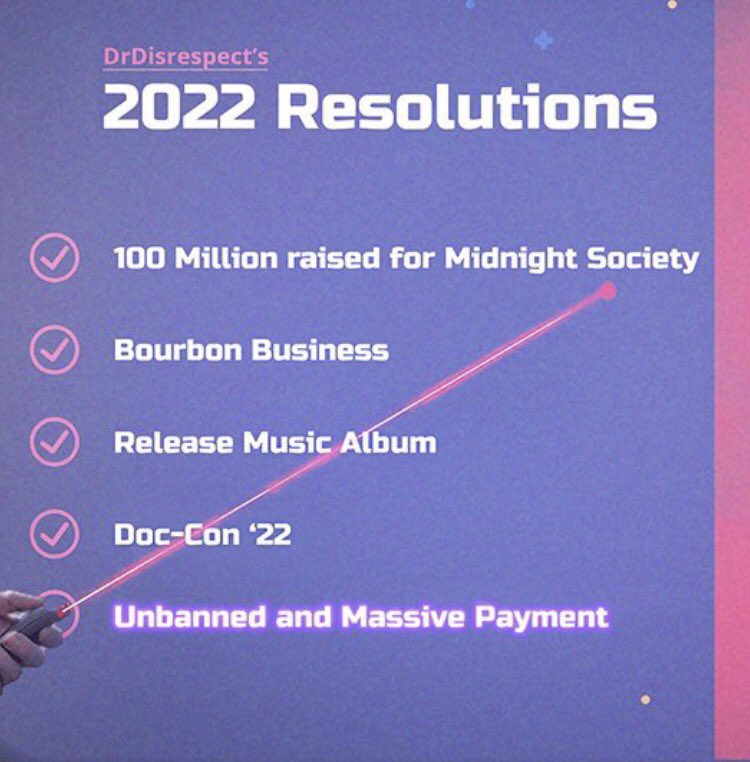 The rivalry between Herschel “Dr DisRespect” Beahm IV and Twitch continues to become more and more hostile. This time, the doc took a dig at the live streaming platform in the form of his new year’s resolutions.

On January 1st, Dr DisRespect tweeted out an image depicting him giving a PowerPoint presentation to a room full of people. On the screen, the last goal listed in the image reads “unbanned and massive payout” in purple text.

“The Doc is likely referencing is his mysterious, indefinite ban from Twitch, especially with the highlights matching the platform’s signature colors,” writes Blaine Polhamus of Dot Esports. “Still without a public reason, DrDisrespect has been pushed off of Twitch for nearly two years, and he has made his disdain for the company apparent ever since.

Dr DisRespect has been very vocal about his displeasure with the live streaming company for quite some time. On June 26th, 2020, Twitch permanently banned Dr DisRespect from streaming on the platform.

The new year is a great time for drama posts like this. Off the bat, he said he wants to raise $100 million for Midnight Society, which I think he is going to do given the state of the industry. It’s not that crazy of a number for a game development studio. He also wants to release a musical album, which is a no-brainer to me. He has already recorded music in the past and even made some bangers, so it’s smart for him to circle back to that. That last resolution is obviously talking about Twitch. It’s a ballsy move of him to say he’s going to get unbanned AND receive massive legal payouts. This graphic clearly looks produced. It’s not something he just threw together last minute on January 1st. I don’t know if it makes good legal sense to call this out publicly when none of these issues have been resolved. It’s surprising he would open his mouth about it at this moment in time considering the ongoing legal battle (we assume) he is in.

(All information was provided by Dot Esports, GameRant, and MSN)

0 comments on “Dr DisRespect Is Going After Twitch (Again)”