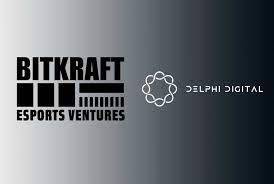 BITKRAFT Ventures, an esports venture capital company, recently announced it entered into a strategic partnership with Delphi Digital to invest in blockchain-based assets and games. According to a press release, the two organizations will work together to identify “the most exciting companies” related to blockchain.

“The breadth of knowledge and experience of the Delphi team in the crypto space is hard to come by. With this strategic partnership, we intend to expand our best-in-class portfolio support capabilities and be smarter and faster when it comes to identifying great entrepreneurs and ideas in the intersection of crypto and gaming,” said BITKRAFT Ventures founding partner Jens Hilgers. “The huge impact of blockchain technology on the games and digital entertainment space is starting to emerge as we speak and BITKRAFT aims to play a significant role in it.”

BITKRAFT and Delphi plan to collaborate to research and find out information on cryptocurrency and blockchain-based companies. BITKRAFT also said it will support investments in tokens as an asset class.

Blockchain is a specific type of database that stores “data in blocks that are then chained together.” Blockchain is best known as the record-keeping technology used for the Bitcoin network.

Bitkraft has an unfortunate reputation of doing many bad deals at inflated valuations. It’s mostly the result of having to deploy too much capital in an industry where the start-up scene is still somewhat immature. We’ve seen them stray from gaming on a few occasions (ETFs for example), and this expansion into blockchain and token deals shows a lack of focus, and a desperate move to justify raising larger and larger funds.

(All information was provided by Esports Insider and Investopedia)