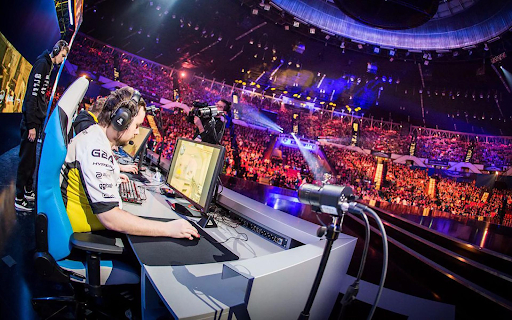 Any large-scale competition played at a high level will inevitably involve betting sooner or later. As a result, betting on computer game competitions, or esports, has been gaining immense popularity recently. The esports industry is already growing at a rapid pace, but the industry needs to give credit to the helping hand that betting has provided in speeding up the growth of esports. Here are a few reasons why betting has helped the esports industry develop faster!

The esports industry has rapidly matured over the past decade, and the esports scene is receiving as much, if not more, viewership and interest than some of the most famous traditional sports. As a result, the largest bookmakers in the world will naturally seize this opportunity to open esports betting markets on their websites to interest esports audiences. The best betting sites for esports, such as Bet365, Betway, 1xBet, and Parimatch, have all made an entrance to the esports industry by providing esports markets for people to bet on. At this current point in time, it’s almost expected for almost all betting sites to offer esports betting markets. Bookmakers would be falling way behind competitors if they only provide sports betting, as the betting industry in esports is quickly generating billions of dollars in revenue.

In a few years, esports fans can expect to see esports markets in almost all bookmakers, as the growth of the esports betting industry is nothing to joke about.

One problem with traditional sports leagues is the limited number of daily matches and lack of frequent international tournaments. However, when it comes to esports, multiple high-level tournaments go on every day, and there are various games to bet on.

The consistent matches allow bettors to bet on esports events that occur every day of the week, at any day of the year, as opposed to major traditional tournaments that only happen annually.

If sports bettors need help understanding the mechanics of an esports game, there are sports-based esports games such as NBA 2K and FIFA, which will help these bettors make an easy transition to esports. NBA 2K and FIFA are simulation games of Basketball and Soccer, making these titles very simple to understand and get into for someone who is looking to step into esports for the first time.

One of the eye-catching features of esports betting is that different esports titles will have unique betting options. These attractive betting options have made regular sports bettors curious, as there are many new and fun things they can bet on.

For example, in Counter-Strike, a First-Person Shooter game, bettors can bet on which player will get the first kill, which team will win the first five rounds, and even whether the first kill on any round is a headshot or not.

Or, if bettors want to try betting on something more complex, there are esports titles such as League of Legends. Bettors can bet on the total damage taken in a match, if a game will end over or under 35 minutes, or which player will get the most kills.

These are only a few out of hundreds of fresh betting options bettors can find in the dozens of esports titles. The interesting betting choices will give traditional sports bettors a new betting experience, which has helped the esports industry bring in more fans.

It is undeniable that the general betting industry is raking in billions of dollars annually, so the top bookmakers have lots of money. Fortunately, significant bookmakers are using some of this money to sponsor professional esports organizations, which has helped many esports teams develop.

Multiple esports teams have received financial support from sites for esports betting, helping them improve their training through providing boot camps, compensating international flights, and paying for player buyouts. The financial support has facilitated many teams to evolve and play at the highest level, giving a good show for esports fans. For example, leading bookmaker 1xBet partnered with massive teams such as OG Esports and Tundra Esports.

Not only do these esports betting bookmakers sponsor professional teams, but it is also nothing new for them to sponsor major tournaments as well. GG.Bet, another large bookmaker, is known for sponsoring huge tournaments such as The International 2022 and PGL Major Stockholm 2021. These tournament sponsorships are one of the main reasons why these fantastic tournaments can happen in the first place.

Leaving aside bookmakers and transitioning sports bettors, most people can agree that placing a wager on a match will make spectating it more thrilling. Many esports fans who do not actively play anymore still involve themselves in the esports scene due to betting.

Substantial tournaments such as CS:GO Majors or League of Legends Worlds are perfect esports events for players to bet on. These events always have high-stakes matches with lots of pressure on both teams, and having the thought of betting on these types of games has constantly reeled esports fans to stay invested in these tournaments.

Betting on matches allows bettors to replicate the thrill and emotional stakes of the game they are watching. It makes them heavily invested in the outcome of the competition. It’s not easy to replicate this intense feeling, which is why many people stay in the esports scene and contribute to the industry’s growth.

In conclusion, millions of sports bettors have started to get involved in the esports scene, increasing viewership and fanbase. These people are reeled into esports due to easy access to esports matches in many bookmakers, consistent matches to bet on every day, and exciting betting options that bettors can only find in esports. Bookmakers who benefit from increased revenue have also used their profits to invest in esports teams and tournaments, which has helped the industry grow.

0 comments on “How Has Betting Helped The Esports Industry Grow Faster?”